Wrong turn is a 2021 horror-thriller film released worldwide under the title “Wrong Turn: The Foundation”. The film was directed by Mike P. Nelson with a screenplay by Alan McElroy. It is the seventh installment of the Wrong Turn franchise. The film’s cast includes Charlotte Vega, Adain Bradley, Emma Dumont, Dylan McTee, Daisy Head, Bill Sage, and Matthew Modine. The film was co-produced internationally between the United States, Canada and Germany.

Wrong turn released in theaters on January 26, 2021, just one day, amid the pandemic. The seventh installment in the long-running, bloody franchise is considered to be an improvement over its predecessor. The film has garnered generally positive and mixed reviews from critics and fans alike. This film tells the story of a group of young hiker friends who stray off the beaten path during the Appalachian trail. This film tells the story of their encounter with a cultic civilization that has long lived in the forest.

The film starts with a group of young, trendy hikers – Jen, Darius, Milla, Adam, Luis, and Gary. The group traveled to a small town in Virginia before embarking on a hike in the Appalachian mountains. There, they were warned by several local residents, who warned them not to go to the mountains. Before the climb started, Jen briefly met a woman named Edith and a young girl Ruthie. The group began their ascent on foot and spent several hours before they faced an unprecedented tragedy. One of the group members, Gary was killed by a tree trunk that rolled under him. The group decided to set up camp for the night, restless and traumatized by the incident.

The next morning, the remaining group of friends find that Milla and all of their cell phones are missing. That’s when they found a 19th century plaque. The plaque commemorates the founding of a group of settlers called the “Foundation”. 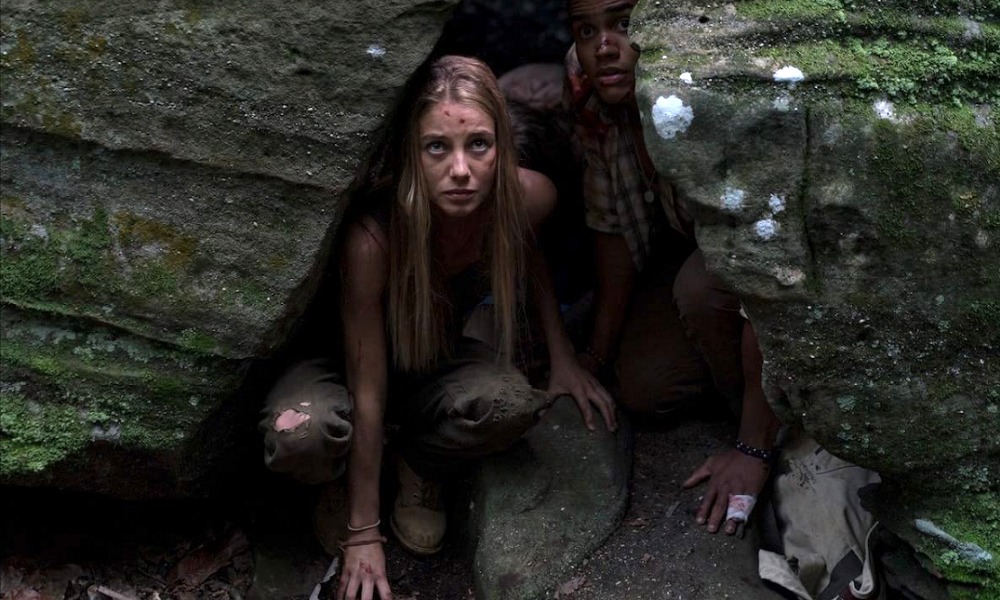 The group began looking for Milla when Adam was caught in a trap. After a while, the climbers saw Adam being carried away by a strange man wearing an animal skull mask. The group confronts the men and Adam manages to escape. Before escaping, Adam killed one of the men by crushing his skull with a club. Shortly thereafter, Milla appeared and explained to the group that she had gone into hiding after seeing the men. The group tries to escape but is soon ensnared by more men wearing masks. Milla was killed by an arrow, belonging to one of the masked men, but not before falling into a hole and being impaled by a spiky tree branch. Meanwhile, another group of climbers was caught by the men.

The group of climbers was then taken to a settlement, deep in the forest. The group was produced before a kangaroo court and charged with the murder of one of the men wearing a mask. Jen reunites with Edith and Ruthie and recognizes them from before. Cullen is the leader of the foundation, which found Adam guilty of murder and sentenced him to death. He then convicted Jen, Darius, and Luis to “Darkness” for lying. Cullen carried out barbaric punishments, beating Adam to death with the same stick he used to kill the masked man. He then burned Luis’s eyes, blinding him. Jen begs Cullen to get him and Darius off the hook, saying that they will serve them. Cullen accepts requests for mercy and welcomes Jen and Darius to the Foundation. After that, Jen is taken to a hut and forced to have sex with Cullen. 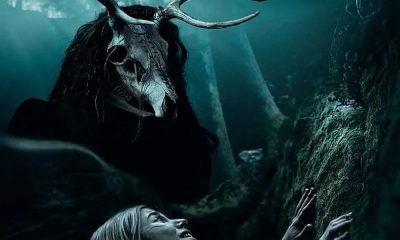 Several weeks passed and Jen’s father, Scott, reached a nearby town looking for him. Scott hired a local tracker to guide him through the woods. But the tracker was soon killed by one of the traps. Scott manages to find a solution but is ambushed by the men. Jen, who appears to have been brainwashed by the Foundation, shoots Scott with an arrow. Scott was sentenced to “Darkness” by Cullen in court, on charges of trespassing. Later, Jen managed to sneak out with her father. She explained to him that he only shot him to quell any suspicion against him. When the father and son pair escape, they meet Darius, who refuses to run away with them. Jen and Scott escape with Ruthie’s help but are soon chased by Cullen and his men. However, this time they were repelled by gunmen from the city.

Months passed, and Jen and her father continued with their normal lives. One day, Jen went to meet her mother at her home but found that she welcomed Cullen and Ruthie into the neighborhood. Facing Jen, Cullen finds out that she is several months pregnant with her child. Cullen asks Jen to return with him to the Foundation. Jen agreed, reluctantly. He agrees to return with Cullen but on the condition that he never messes up his family life. Jen leaves for the Foundation with Cullen and Ruthie in an RV. The film ends with the RV spiraling out of control and crashing. Cullen flees but is stabbed by Jen, who then grabs Ruthie’s hand and walks back to her family.

Improvement from its predecessors

Compared to the previous six installments in the franchise, this one appears to be a huge upgrade. Wrong turn (2021) removed the trademark inbred-cannibal-kill-unsuspecting-trespassers storyline that the previous six films followed. The films don’t have much going for them apart from the expected bloody festival routine. This film presents a narrative that is a little more substantial, albeit backward. There are stories that are more coherent and some of the characters are left out but not as unbearable as in the previous films. Characters go through the same storyline, make equally bad decisions, and meet gruesome deaths that are familiar. However, the film deviates from the essentially repackaged version of the first film in the series.

The story tries to work with some of the political themes between hip socialist walkers and 19th century southern cults. But it is incompatible with the intellectual ambition the story itself has set. Foundation appears to be a confusing amalgamation of Darius’ socialist utopia and conservative dogma. The message he seems to convey is far from ripe or perfect. But one doesn’t go to a Wrong Turn film expecting intellectual political commentary. People don’t usually get into Wrong Turn films at all, other than the expected bloody scenes. 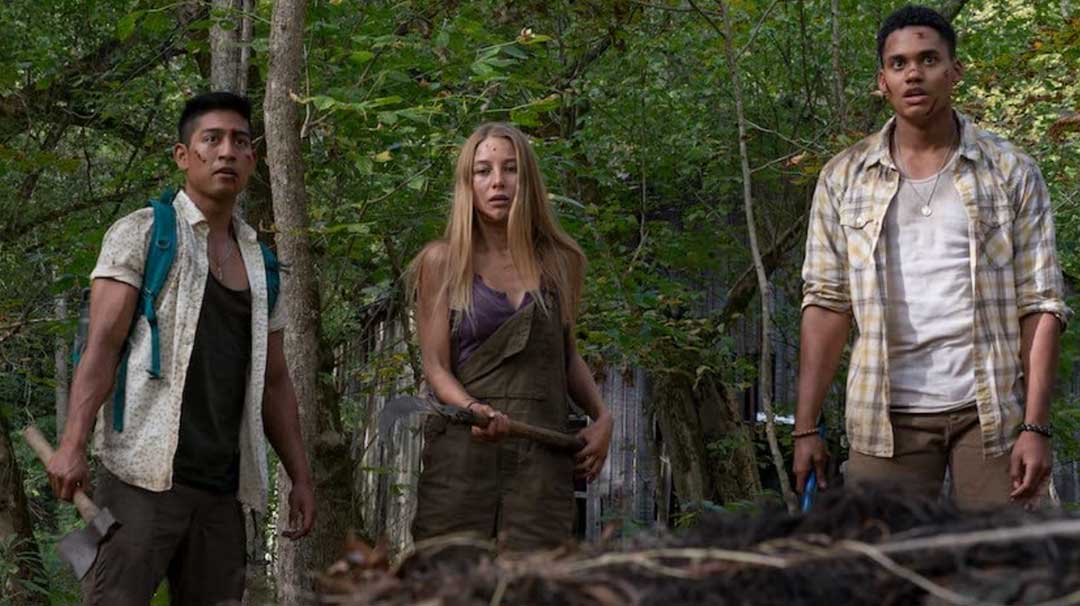 This film gives depth to its characters, something missing from everything that came before in the series. You support the characters, instead of unwittingly going through one bloody death motion after another. The character dynamics are much better here, as are the creative and thrilling killing traps. One of the important characters in the film is Jen’s father, Scott. He provides an emotional investment for the audience and brings the film together. Her search for her daughter gives the audience something to watch out for and adhere to. It only makes death even more gruesome and painful. The stakes in this film feel higher because it has that emotional context. The characters don’t become a blank slate and only exist for the purpose of getting killed definitely helps.

There is fear but also optimism in the midst of conflict. While the film has a lot of logical inconsistencies and plot holes, it’s not nearly as bad as its predecessors. With the silliness of the previous films, this one is also filled with bloody violence and death. The acting is also grounded and believable, unlike the over-the-top shows that have graced the entire franchise. In terms of antagonism, the Foundation in this film certainly helps provide more depth to the plot. But unlike the previous trio of cannibals, this film fails to be as iconic as they are. From a budget perspective, it is competent and the cinematography is also worth mentioning. Foundation male costumes are believable and creepy. Trying to do new things, and getting deeper into the plot, this film could have done better with a shorter runtime. Overall, being a refreshing installment, Wrong turn is an improvement over its predecessor.