Delta and Koji stood in the mountains talking about the Leaf Village. Koji revealed that there was once a special unit that monitored everyone who entered or left Konoha through their Chakra. He also said the Yamanaka Clan leads the Sensory Unit. Delta replied that she knew them, but she thought it happened during the war. Koji reveals that the Shinobi are becoming more cautious of Kara. They are currently working to improve the Sensory Unit. They can distinguish the Chakra that was previously registered in Konoha or not.

If something unlisted and unknown enters, it will be detected immediately. Delta commented that it wasn’t easy to infiltrate. He headed somewhere and told Delta to stick to the plan. He managed to sneak into the leave and told Delta to stay where he was. Delta wondered how Kiji did that since Konoha had such high security. Koji told Delta to watch over him, and he shouldn’t cause trouble. He dived deep within the village of Konoha. Koji wondered where Kawaki could be. Delta was left wondering why Koji didn’t get caught in the Sensory Unit’s net.

Delta thought that Koji might have snuck in unnoticed. He was angry that Koji was always one step ahead of him. Inside the village, Koji wears a hooded mask that hides his identity. He starts tracking Kawaki and comments that this is a mission; he can do what he wants. Inside his coat, he hid the summoning toad that was helping him. Meanwhile, Kawaki had finished repairing Himawari’s vase. He’s getting bored because Boruto is playing video games. Kawaki asks himself what Boruto wants him to do.

Miyuki and Sarada visited them and told Hinata that they had no mission today. They were just thinking of visiting Boruto, and Hinata welcomed them. Boruto comments that the two of them rarely come today. Mitsuki notices that Kawaki is too quiet and says they came to spy on Kawaki. Sarada realized that she was the one bringing it up and told Mitsuki to stop exposing her. Mitsuki comments that Sarada is the one who invited him. Kawaki comments that it’s good that Mitsuki is honest.

Mitsuki stepped forward and told Kawaiki his name and that he was on the same team as Boruto and he was his friend. He offered a handshake, and Kawaki asked what the big idea was. Kawaki said he wasn’t naive to put his dominant hand on Miyuki’s. Sadara talked to Boruto and asked him how he faced Kawaki. Boruto comments that he can see that Kawaki has an attitude. Sarada looked at him, and he said he had no interest in making friends with them. Naruto arrives and says they will do it next time because Boruto’s friends are here. 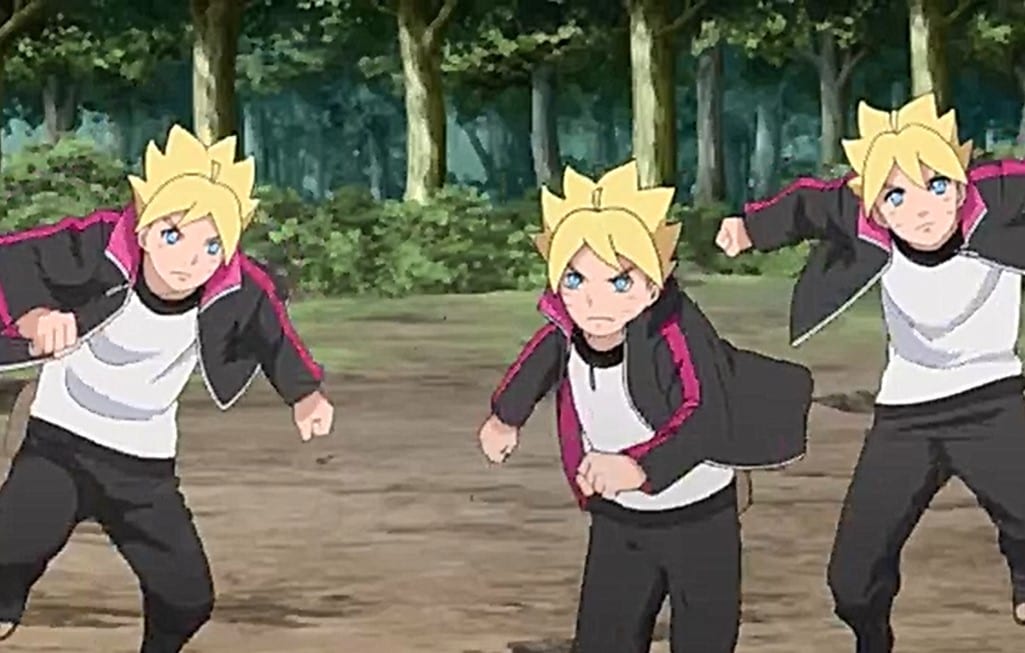 Boruto wonders what his father wants to do with him, and he asks. Naruto reveals that he is thinking of becoming Boruto’s training partner for the Shinobi Hand-to-Hand Combat. Boruto decided to train with his father, and Miyuki, along with Sarada, decided to follow. Naruto told Kwaki to come with them, and they might learn something about Karama. The two of them head there, and Boruto releases a technique which Kwaki realizes that Naruto also uses it. Miyuki revealed that it was Shadow Clone Justu.

Kawaki notices that Boruto’s Shadow Clone Jutsu isn’t working; Naruto defeats the Clone. He told Boruto to upgrade the Shadow Clone to use Karma because they needed to figure out how they could get Karma. Boruto comments that it won’t be easy, and Kawaki Karma appears, which makes Boruto’s Karma appear. Naruto, Mitsuki, and Sarada noticed that Karma Boruto was reacting to Karma Kawaki. Boruto attacks, and Naruto feels the difference.

He realized that Boruto’s kicks and punches were starting to get heavier the moment he landed on him. Boruto attacks Naruto with Lightning Style: Lightning Arrow. Naruto used his Shadow Clone Jutsu to block the attack. Boruto is defeated when he tries to perform the moves his father used to defeat him. But Naruto was impressed that Boruton trained well, and he was smart during combat training. After training, they returned home, and Sasuke visited them. Kawaki noticed that this family was full of love. Meanwhile, Koji managed to find Kawaki.