Miss Kobayashi is the only human in her world who lives with dragons. He had welcomed the third dragon who cursed him into a man for one night. Ilulu wonders why Kobayashi saved him from the Dragon Slayer Camp who wanted to kill him. When they arrive home, they meet Tohru, who recognizes Ilulu, a dragon from his world. Let’s find out more about Miss Kobayashi and dragons in the latest development of Miss Kobayashi’s Dragon Maid S. In the morning, Kanna hears a voice calling her to come and play with her.

Kanna opened the door and found that it was Saikawa Riko. The two enter the house, and Riko asks about Kanna’s mother. Kanna reveals that her mother has gone shopping with Tohru. Riko thinks that only the two of them are in her house, and she can start her cinderella story. Riko went to the restroom and found that someone was there. He runs back and asks Kanna about the lady in the bathroom. Kanna replied that it was Ilulu and her new friend. Riko comments that that means it’s not the two of them.

Ilulu came out and joined the two in the living room. Riko wondered how long Ilulu and Kanna had known each other. Kanna says Ilulu lives in this house. Riko thinks that there are many mysteries around Kanna. Kanna calls her mother by her last name Kobayashi, and Tohru dresses up as a maid. Riko’s owner what happened in this house. Kanna reminds Riko that they have to play. Riko talks about playing cards. They asked Ilulu to join them, and Ilulu shook her head.

Ilulu goes to her room, and the two continue to play together. Riko wondered if she had angered Ilulu. Riko and Kanna enjoy a card game, but Riko ends up losing. A lady comes and tells Kanna that she has brought snacks. Kanna told the woman that Kobayashi and Tohru weren’t home. The woman entered the house and told Kanna to share snacks with Riko. The woman is Lucoa, who heads to Ilulu’s room and asks why she is alone. Ilulu replies that he has no right to play with humans since he tried to destroy this city.

Ilulu also says he can’t forgive himself and Lucoa asks if he wants to turn back time and change history. Lucoa comments that not many dragons have the right to interact with humans. He leaves the room and tells Ilulu that he will talk to the two of them. Ilulu realizes that he wants to play, but he is embarrassed by his past behavior. 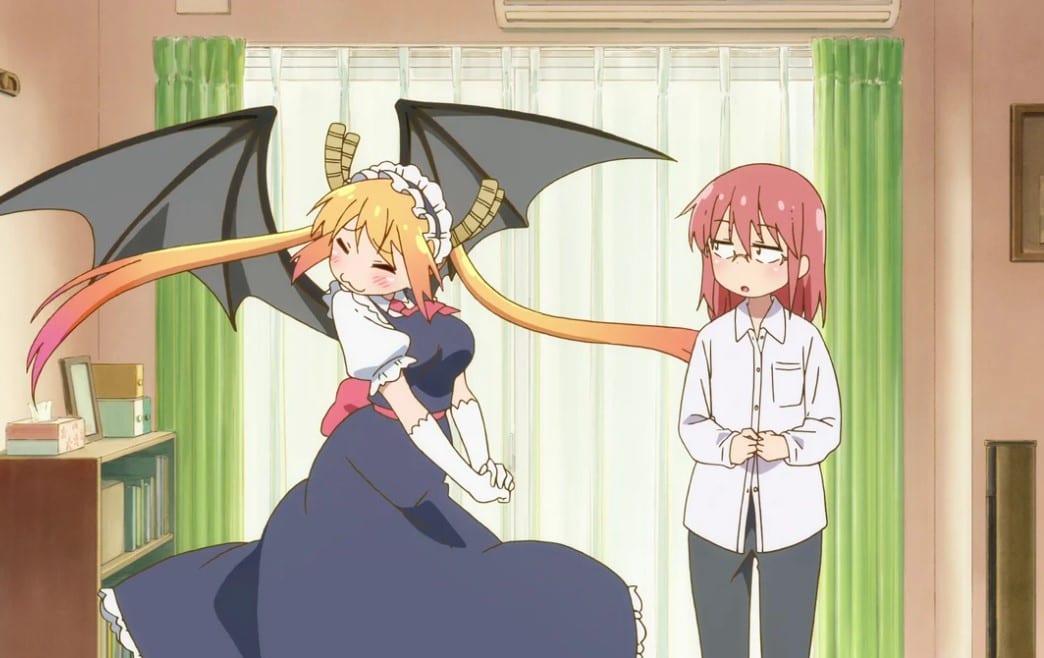 Miss Kobayashi is an Idol

Ilulu thought that Kobayashi would solve the problem. Riko tries to follow Kanna, but she keeps losing. Kanna wondered if Riko had deliberately lost to play with her so many times. Lucoa realizes that he has to take Kanna with him and uses a spell to make Riko go to the toilet. Riko arrives at the bathroom, and Deja Vu occurs. Ilulu looked at Riko, who started filtering after noticing that Ilulu was in her room, but she was here for the second time.

Lucoa went to the door and blocked it so Ilulu and Riko could talk. Riko tried to open the door, but she found the door jammed. The two start talking, and Ilulu tells him he wants to play with them. Ilulu reveals that he is a ruthless person who spoils everything. Riko also talks about her violent actions and how she disliked Kanna when they first met.

The two decide to become friends and have to go to the living room to play with Kanna. The three of them are having fun, and Ilulu finds it fun to play with humans. Then Tohru and Kobayashi returned, and the family enjoyed being together. They talk about idols, and Tohru thinks Miss Kobayashi needs to be an idol. In the morning, Tohru throws a party, and Miss Kobayashi wonders what happened. The family had fun playing games together.