Mei recently arrived at the city, where she was met by a mysterious incident. Mr. Yamamoto meets him in the evening and realizes that this is the researcher he’s been waiting for. Without wasting any time, they decided to do business. The two of them listen to Yamamoto’s company and discuss the strange music they keep hearing. Mei manages to track down her music, but she connects with Yun and Haberu. Yun was shocked, thinking that someone who wants to see their company fall.

Mei and Yun have been unable to communicate since the police arrived at the scene. They arrested Yun and Haberu, but their boss followed them and shouted at the Chairman. The head realizes that the boy is working for Goro’s old grandfather. Goro was kind to this town, and the boy meant no harm. The police chief told the police to let the children go. Goro decided to have dinner with the boys at a nearby restaurant. They talk about mysterious incidents that keep happening. Goro tells them about his latest creation.

Goro told Yun and Haberu to start investigating the incident, and he would finish his discovery. Meanwhile, Mei finishes her work with Yamamoto and returns home. He had discovered the truth about Yun and Haberu that they were good people. In the morning, Goro finished his discovery, and he was visited by people working for Yamamoto. The man wondered why Goro kept creating strange robots. Goro told the man that he could call the robot a Jet Jaguar.

The person thought Yamamoto had taken a wrong step in doing business with an older man like Goro. He told Goro what Yamamoto wanted his company to do for him. Goro told Haberu to go with Yamamoto’s partner because Yun was not there. The two of them left, and Haberu traveled by bicycle while the other two were by car. Yamamoto’s colleague asked his driver about Goro as they were from the same place. The driver told him not to underestimate Goro because no one has technology like Goro’s.

They arrived at Yamamoto’s company, and Haberu fixed the problem and returned. On his way, he met Mei and realized that they attended the same school. The two of them were traveling together, talking about technology and the incidents that were happening. Meanwhile, Gor meets Yun at a festival, and they are about to show off their new discovery. But other residents saw Goro’s discovery and thought it was a strange robot. They are not impressed by the giant robot, and Goro comments that they will see what the robot can do. 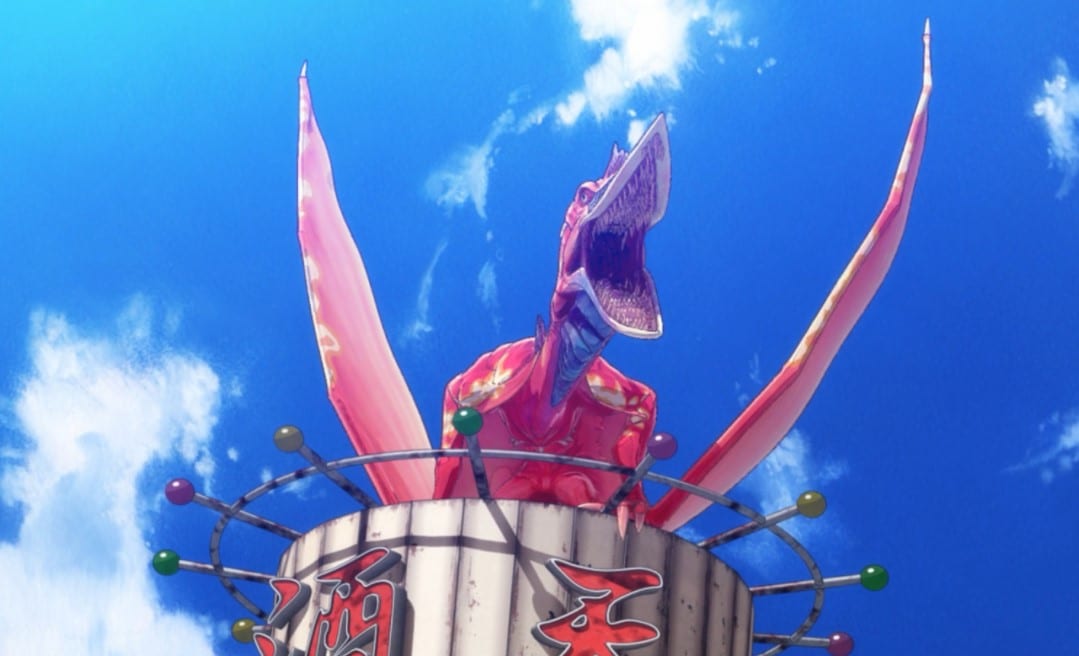 Suddenly the village was attacked, and all they could see was dust and an explosion. Residents began to panic, fleeing as they watched shops and buildings collapse. During the chaos, Yun saw a huge shadow and wondered what had happened. He saved a boy who was about to be swallowed up by a giant dragon. The giant dragon began to rampage, and Goro fought him using a Jet Jaguar.

The Jaguar jet was destroyed. But he fixed it and fought the giant dragon again. The dragon decided to retreat, but the Jet Jaguar. Goro comes home and repairs his Jet Jaguar while the others investigate the giant dragon. The next day the town was attacked again, and Goro noticed that, when he returned from buying a new ride.

He returns home and tells Yun and Haberu to prepare for battle as they are headed somewhere. They fight with the dragon and save the children who are on the bus. Yun managed to lure a group of dragons away from the city, but they started falling from the sky one by one. Today no one knows what made the dragon fall from the sky. Life returns to normal, and the city is saved by researchers who continue to discover what had happened. They don’t know what they are up against.